Keep Your Towels Fresh 2022: How to Get A Smell Out of Towels 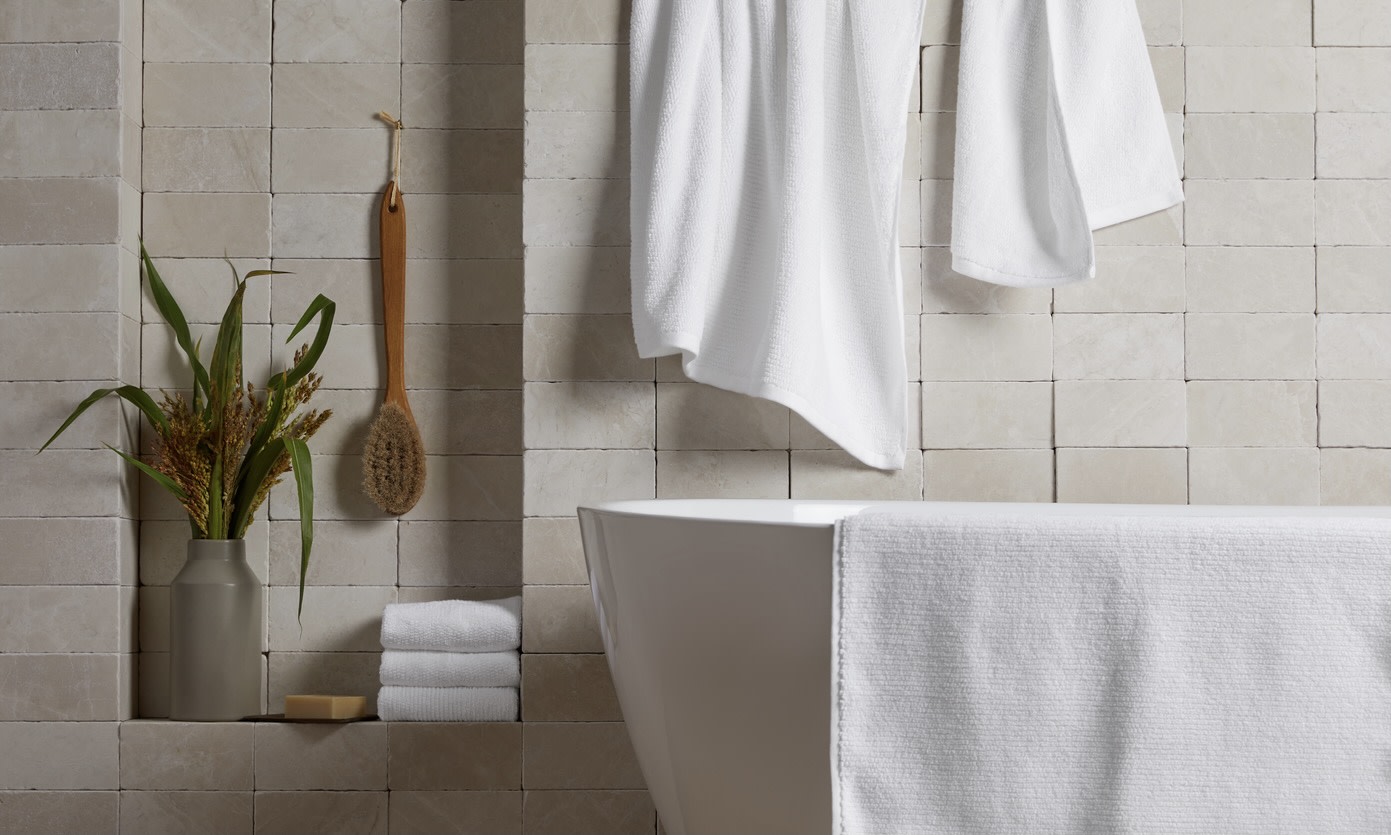 Whether you prefer a shower or a bath, getting clean can be one of the most meditative and relaxing parts of your day. Unfortunately, nothing pulls you out of that sense of calm and freshness quicker than drying off with towels that smell like mildew!

With a few key techniques, we’ll teach you the simplest way to get musty smells out of towels and prevent mildew odors from happening in the future.

Preparing to Get the Musty Smell Out of Towels

You may have learned the hard way that just washing sour-smelling towels isn’t enough to get rid of a musty smell and recreate a sense of freshness. Lingering mildew and odors may seem to go away immediately after washing, but unless you manage them correctly, they’ll return with a vengeance!

If your towels smell musty, always separate them from your fresh towels and other laundry. Keep your mildew-free sheets, clothing and other textiles separate from any towels with a mildew smell or the mustiness will spread to your other laundry.

The longer your damp towels wait for a wash cycle, the worse the mildew smell will become. If you can’t do laundry right away, avoid balling up musty towels in the laundry basket or in the washing machine. Instead, lay them flat or hang them up to start the air circulation process.

How to Get Mildew Smell Out of Towels

Neutralizing mildew smells in towels isn’t a one-step process. To make your towels smell fresh, you need to completely remove the causes of unpleasant odors rather than just masking the smell.

Why do your towels smell? In most cases, bacteria, mold and mildew are the primary causes of odors.

White vinegar is a safe, powerful and easy to use neutralizing agent for mold and mildew that many of us already have in our homes. Put your towels in the washing machine with your regular detergent and a warm or hot-water wash setting.

For mild mustiness you can add a cup of vinegar to the washing machine for the final rinse cycle. For more extreme mustiness or visible mildew, try adding the vinegar earlier for an initial soak.

The first machine wash cycle kills the source of odors, but to fully remove odors themselves, you’ll need to run your towels through a second washing cycle.

Here’s where the baking soda comes in. For the second cycle, add a half cup of baking soda to the basin. Adding detergent is optional for this stage. Your towels are already clean, so you’re just trying to fully remove lingering odors, including any vinegar smell your towels may have absorbed in the last wash cycle.

What About Laundry Beads?

While laundry beads are frequently marketed as a way to freshen towels and other laundry, they mask odors rather than neutralizing them. Add laundry beads to the final wash cycle if you’d like, but don’t skip the vinegar and baking soda steps if you want to remove mildew smells from towels and keep them from returning.

For more about the towel washing best practices, read the How to Wash and Properly Care for Towels guide.

Now that your towels have returned to their original freshness, complete the process with proper drying techniques to prevent mildew on towels. Try to avoid letting clean laundry sit in the washing machine basin for longer than a few minutes before drying. The longer wet fabric sits, the more likely it will mildew and start to smell all over again.

In warm weather, line-drying laundry in the sun is a great way to keep towels smelling fresh. Direct sunlight also helps naturally neutralize mold and mildew, so it’s a win-win situation for you and your loved ones.

Drying Your Towels in the Dryer

If line drying isn’t possible, then pop your freshly laundered towels in the dryer and tumble dry on a low heat setting. Try adding a couple of wool dryer balls for faster and more effective drying with minimal static. Learn more in our guide, Do Dryer Balls Really Work?

How to Prevent Your Towels From Getting Musty in the Future

Now that we’ve managed your stinky towels, it’s a good idea to consider what caused them to become musty in the first place so you can prevent it from happening again in the future.

Your bathroom is generally the most humid room in your home. Steamy showers, small square footage and insufficient ventilation all lead to increased humidity that can prevent towels from fully drying after use.

Fortunately, there are a few key steps you can practice to make your towels last longer and keep smelling fresh.

Towel hooks may look good, but they’re less functional than towel racks or towel bars when it comes to proper drying. The increased surface area of a towel bar lets air circulate more effectively to avoid mustiness. If your bathroom has towel hooks, consider swapping them out for towel bars.

If you share your bathroom with a few family members, you may be saving on space by folding towels in half on your towel bar. When you fold a wet towel, you create closed-off areas that trap air and cause odor. Spread out wet towels for better circulation and faster drying.

If you have plenty of extra towels, you might be tempted to grab a fresh towel and toss your old one in the hamper to wait for laundry day. Staying on top of laundry is one of the most effective ways to prevent odors from taking hold. If you don’t have time to wash your old towel right away, make sure it’s fully dry before leaving it in the hamper.

If you feel like your towels never fully dry between uses, you may need to come up with a bathroom humidity solution. Exhaust fans quickly circulate air and remove steam so your bathroom can dry effectively. Not only will a fan help your towel avoid mustiness, but it will also help you keep your tile grout looking clean and bright for longer periods of time.

If it’s been a few years since you’ve replaced your towels, then it's possible you’ll never fully banish musty and mildewy smells from them. Unless you manage odors correctly from the start, they’ll hang around for the lifespan of your linens.

Materials that dry more slowly are also far more prone to mustiness over time. That’s why it’s so important to invest in high-quality towels and take proper care of them from the first use.

For more details on when to retire your towels and other bathroom essentials, explore the When to Replace Towels, Shower Curtains, Bath Mats, & More guide.

Towel Quality You Can Count On

The Classic Turkish Cotton Towels, Waffle Towels, Organic Cotton Towels and Soft Rib Towels  you’ll find at Parachute are wonderfully absorbent, quick drying and easy to clean, so you can maintain a healthy, fresh smelling bathroom. Investing in these and other great bath products from Parachute will start you on a mildew-free path so time spent in the bath or shower is always as relaxing as possible.