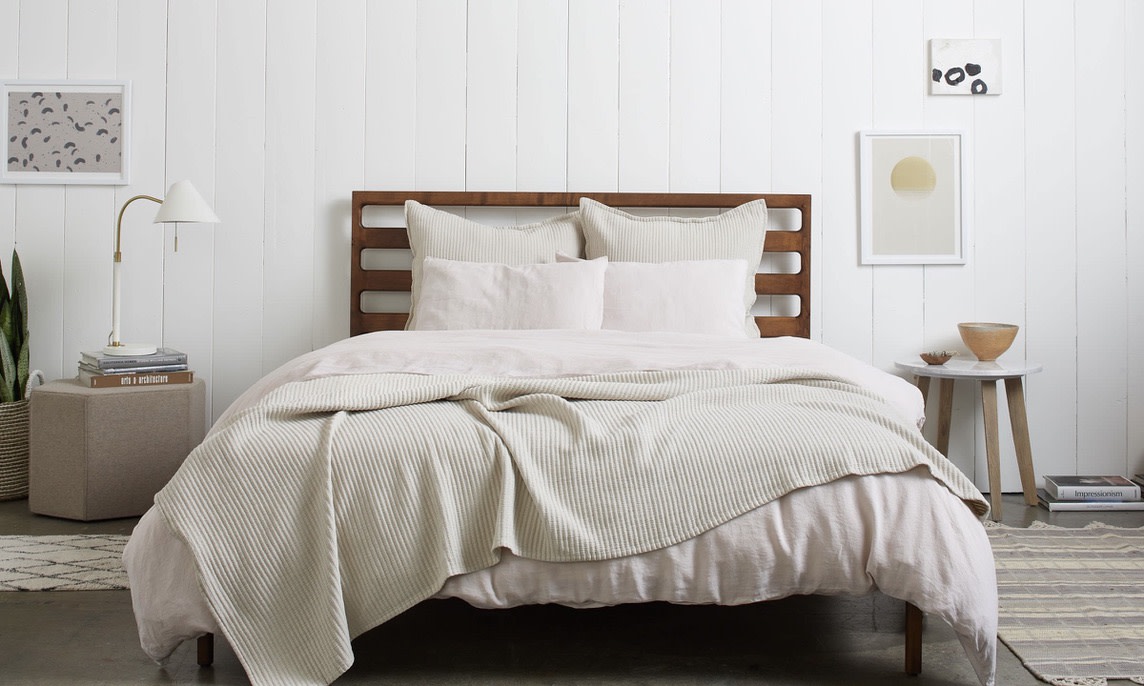 Matelasse fabric dates back to the mid-18th century, but it’s as popular today as it was back then. The traditional weaving technique used to create metaless bedding makes a beautiful and lightweight fabric that feels comfortable on the skin. Matelasse is usually embellished with gorgeous patterns, with a padded-like appearance.

Matelesse works both as a decor accent and as an additional bedding layer for extra warmth during the colder months. Coverlets made from this attractive material are the perfect lightweight summer blankets.

Read on to learn more about the fascinating history of matelasse, what it is, and the pros and cons of adding it to your bedroom decor.

Matelasse (pronounced mat-lah-say) refers to a specific weaving technique that results in quilted-like fabric without stitching. The matelasse material, also known as “figured fabric” or “Marseilles cloth,” is woven from several interlocking threads and thick cotton yarns for a signature puffy, quilted appearance. The great thing about the technique is its versatility. Matelasse textiles can be heavy and bulky or lightweight and delicate.

How Was Matelasse Invented?

The cushioned textile’s origins can be traced back to the beginning of the 18th century, when the French city of Marseilles became famous for its intricate, hand-quilted fabrics known as "trapunto" or "whitework.” These materials were primarily used for women’s clothing, as the elaborate Rococo movement was flourishing at the time.

But the British wanted to find a way to manufacture these gorgeous Provençal textiles in England. So in the mid-1740s, Robert Elsden invented a technique that imitates the quilted look of Marseilles whitework. He used a loom to produce his version of the fabric.

The British called the new fabric “Marseilles cloth,” but the French renamed it “matelassé” after the French word for quilting. And while it took a couple of decades to fine-tune Elsden’s technique and make it commercially available, its success was undeniable and its notoriety spread well beyond the borders of the UK.

The fashions of the day changed over the next hundred years. Silhouettes became less elaborate and more streamlined. As this happened, matelassé — now widely available and easily produced thanks to the invention of the jacquard loom — gained popularity among home textiles.

The Many Faces and Uses of Matelasse

Today, matelasse textiles are available in simple geometric designs, such as stripes and diamonds. They also come in more elaborate floral and abstract patterns.

The fabric’s decorative appearance makes it ideal for top-of-bedding products such as bed covers, pillow shams, throws and bed skirts, as well as for upholstery and curtains. Because matelasse comes in so many patterns, it’s the perfect match for various décor styles, such as traditional, modern industrial, boho, rustic, French country and contemporary.

Matelasse mimics the look of quilts, but there are some significant differences between the two. First, a quilt is much thicker than a matelasse coverlet. That’s because quilts are made from multiple layers of fabric. Quilts usually have a decorative top layer, a lightweight middle one that serves as padding and a bottom one, made from cotton. All three layers of a quilt are stitched together.

Matelasse, on the other hand, evokes this cushioned look with only a single layer of fabric. As Parachute’s Creative Director Amy Hoban explains: “Matelasse is a lighter alternative to our quilt because it doesn’t have batting in between the layers of fabric.” Parachute offers both quilts and matelasse coverlets in a minimalist, traditional style.

Another difference between quilts and matelasse is size. Quilts are usually designed to cover the entire bed and cascade down to the floor on each side. Matelasse coverlets are smaller and only reach about halfway to the floor.

Because of the fabric’s quilted appearance and effortless chic, a matelasse bedspread is the perfect accent for a boho bedroom. It has that trendy undone look that, when draped over the bed, casually elevates the room’s decor.

Matelasse fabric is also often cut into shams or pillowcases. Because matelasse is much lighter and more breathable than quilted textiles, it provides a unique and comfy sleeping experience. Of course, matelasse shams can also serve a purely decorative purpose. If that’s your goal, then choose a pillow sham that sports a beautiful, eye-catching pattern.

Finally, lightweight matelasse blankets deliver just the right amount of warmth during the breezy summer months. As Amy Hoban says, “In the summertime, I suggest a top sheet and a Matelasse Coverlet. I’m originally from the East Coast – where it can get hot and humid – but I still like to have some type of cover on my bed. In the winter, I’ll use the coverlet at the foot of my bed and pull it up over my duvet when it gets chilly.”

Read more about the different bedding covers in our post Guide to Quilts, Blankets and Coverlets.

Pros and Cons of Matelasse

As a home textile, matelasse has many benefits. If you’re looking to add texture to your bedroom decor, then a matelasse coverlet or some matelasse shams will do the trick. Hoban suggests pairing white linen with white matelasse, or blue matelasse with light grey percale. Our Fabric & Bedding Materials Guide explains the difference between the different bedding fabrics in more detail.

Matelasse is also incredibly versatile. Because the fabric is so lightweight, with a single fabric layer, it can go under or over the duvet without trapping heat and making you sweat.

Another reason to use matelasse in your bedroom decor is its high-end artisanal look that complements so many bedroom styles.

On the downside, matelasse doesn’t provide as much warmth as traditional quilts do. Some sleepers may not like the feeling of the puffy fabric against their skin. Or they may find the quilted appearance of matelasse too traditional for their liking or their bedroom aesthetic.

Where to Shop for Quality Matelasse Products?

You’ll find attractive matelasse bedding at Parachute, including a coverlet and a sham set in neutral shades to match any bedroom decor. Our matelasse fabric is crafted from 100% combed cotton, woven into a classic vertical-stripe pattern. The shams feature a crisp percale back and subtle diamond stitching, invoking the look of traditional quilts.

Be sure to check out our other bedding and home fabric guides: