Why Is European Flax Linen the Best in the World? 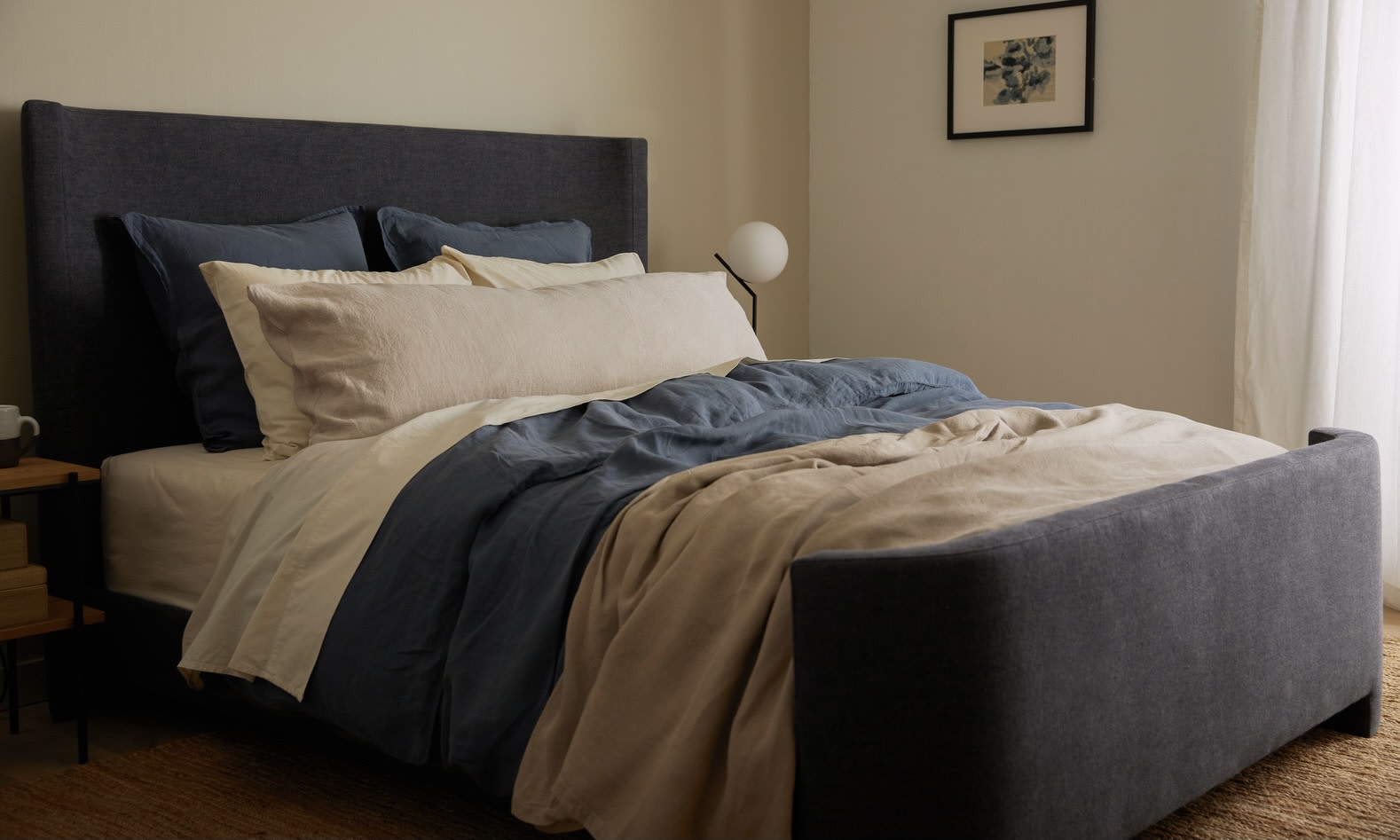 Maybe you're a bedding connoisseur, a textiles aficionado or a home decor hobbyist. Or perhaps you just like to sleep in the most comfortable environment possible. In any case, it's no secret linen is one of the best fabrics available today.

But as you may know, not all linen is created equal. So, what is the best quality linen fabric? Plenty of sleepers and homeowners stand behind European linen as the crème de la crème.

How is it different from other textiles, and what makes it superior? Read on for detailed insight into European linen, including how it's made, why it's unique and a brief history of European fabric-making.

What Is European Linen?

European linen is a textile not only made in Europe but also sourced from flax fibers grown in Europe. The fabric is most commonly produced by Southwestern European countries, including France, Belgium, the Netherlands and sometimes Germany. The European Flax Standard certification ensures products are authentic and ethically produced.

What Is European Flax?

European flax is a flowering plant grown in Southwestern European countries. Also known as linseed or Linum usitatissimum, the unique climate allows the plants to grow as tall as 1 meter. The exceptionally strong, long fibers they produce are the raw material used to loom the coveted European fabric.

Roughly 80% of the world's flax fibers come from Europe, with France as the current global leader. Still, France and its neighbors are relatively small countries, and linen woven from European flax makes up less than 1% of textiles sold globally. In other words, European linen is a rare fabric.

Why Is European Linen the Best in the World?

So, what makes European linen the best linen fabric in the world? The unparalleled quality can be attributed to the unique climate conditions in the European continent, the mineral-rich silty soil and generations of farmer expertise.

Flax plants grown in the region are known for producing extra-long fibers — much longer than those from linseed grown in other parts of the world. As a result, the European fabric is remarkably strong yet notably soft and breathable.

For more on this standout textile, read our blog: Linen: Know Your Bedding Like a Designer.

Another reason European linen stands out in its category is simply that Europeans have been making it the longest. Flax plants are thought to have originated in the Mediterranean region of the continent, with linen artifacts dating all the way back to 4000 BC.

Egyptians were among the first to use linen cloth to wrap mummies, and Babylonians are credited as the first traders of the textile. However, even thousands of years ago, Europe's mild and relatively wet, humid climate was an ideal place for growing linseed. Before long, the textile was cultivated and fabricated across the continent, with the first factories built during the Ancient Roman era.

Even as cotton became a far more common plant fiber and fabric, the unique quality and rarity of European linen helped bring prosperity to the region. During the mid-1800s, the industry employed a substantial portion of workers and provided job opportunities for rural households.

Read our Fabric and Bedding Materials Guide to learn more about the difference between cotton and linen.

Though flax plants aren't typically grown in Portugal, the country has played a significant role in European fabric production over the last few hundred years. Dating back to the 18th century, the nation's textile industry has been as resilient as the extra-long woven flax fibers themselves.

Portugal's cotton market took off in late-1700s Lisbon, when critical machinery was imported from Britain. Access to the necessary manufacturing equipment led to dozens of factories being opened, allowing the Portuguese fabric industry to grow and the economy to flourish.

By the early 19th century, Portugal began exploring linen production — all it needed was raw flax fibers, which were imported from Hamburg, Germany. Equipped with the machinery, factories and textile know-how, Portuguese fabricators were able to spin the fibers and weave them into high-quality, luxury fabrics.

For a deeper dive, check out our article: Portuguese Textiles: A Rich History

There's much to love about flax-woven European fabric. The material is breathable, moisture-wicking, durable, increasingly soft, sustainable and ethically produced. Here's what to know about European linen and its benefits.

Linen is an inherently breathable textile. Flax fibers are hollow, and when combined with the plain square weave of the fabric, air can easily pass through them.

Thanks to its thermoregulating abilities, linen doesn't trap heat, keeps you at a comfy temperature throughout the night, and is unlikely to make you sweat while you sleep. While linen’s easy-breezy qualities make it a top choice during the summer, lots of folks like to use linen bedding year-round.

Like wool and cotton, linen is a naturally moisture-wicking material, meaning it helps draw moisture away from your skin. With an ability to absorb as much as 20% of its weight in water without dampening, this bedding fabric is an excellent choice for people who get night sweats.

When European flax fibers are spun into yarns or threads, they're much less prone to breaking than flax fibers sourced from other parts of the world. This is why the woven textile boasts exceptional strength. While it depends on the product and how much use it gets, European linen is resilient enough to last for decades.

Flax fibers are soft as is. But when spun into threads, woven into fabric, washed, dried and used regularly, the material becomes more luxuriously buttery and continues to soften over time. And after years of laundering, it won't lose its signature strength.

For specific cleaning and care tips, read on:

How to Wash, Dry and Care for Linen Sheets

Does Linen Shrink? Keeping Your Linen Sheets The Perfect Size

Whether grown in France, Belgium or the Netherlands, flax farming doesn't require any irrigation. In the cool, sea-adjacent climate, natural rainfall is the only water it needs.

Since linseed grows remarkably fast, replenishing itself just months after being harvested, it's considered a renewable resource. The plant also helps remove carbon dioxide emissions from the atmosphere.

What's more, linen from Europe is typically made without the use of synthetic chemicals — or any chemicals, for that matter. Thanks to the inherent strength and length of the fibers, European linen fabric production is purely mechanical.

A commitment to ethical labor practices and production transparency is part of the European Flax Standard criteria. The certification adheres to guidelines set by the International Labour Organization, which ensures fair pay, equity and productive employment in humane working conditions. This ethical sourcing is crucial, as linen production relies heavily on manual labor, particularly performed with the hands.

Home Goods Made From the Finest Linen Fabrics

If you're partial to linen and want the best of the best, you've come to the right place. Parachute carries a range of high-quality goods created by Portuguese craftspeople from European flax.

From vintage-inspired bed covers, soft gauzy throw blankets and lofty laid-back quilts to unisex robes, casually textured curtains and timeless table linens, there's something for every room and design taste. If you're new to the world of European fabric, European flax linen sheets are a great place to start.

Do you need a new sheet set? See our guide on How Often to Replace Sheets to find out.

In order to offer the finest fabric from Europe, Parachute works directly with Portuguese manufacturers. Our partners are among the most distinguished in the industry. Over the decades, they've demonstrated resilience through economic downturns and a dedication to artisan-quality goods.

Linen makes up about 10% of Portugal's exports and accounts for 20% of its employment. When you buy European linens from Parachute, you're supporting the nation's textile industry, as well as prosperity within the region.

Parachute is committed to offering ethically sourced, sustainably made products. With thoughtful partnerships, a fair supply chain and a pledge to be certified carbon-neutral by Earth Day 2022, we're always considering the well-being and future of the planet, people and the economy.

In addition to European linen, Parachute proudly carries a range of textiles made from naturally sourced materials. This includes extra-long staple Egyptian cotton, wool, European down, silk, and organic cotton. When you shop the collections, you'll find items with various certifications, including:

Browse our sustainable offerings today, or order a linen fabric swatch to see and feel the difference yourself.

Bedroom Essentials for Your At Home Oasis

How to Wash and Properly Care for Bedding

Sateen vs. Satin vs. Silk: What’s the Difference

Down Comforter 101: What is Fill Power?

How to Organize Your Linen Closet

Best Organic Bed Sheets: What to Look for in Organic and Natural Bedding

Your Guide to the Coziest Robes & Loungewear