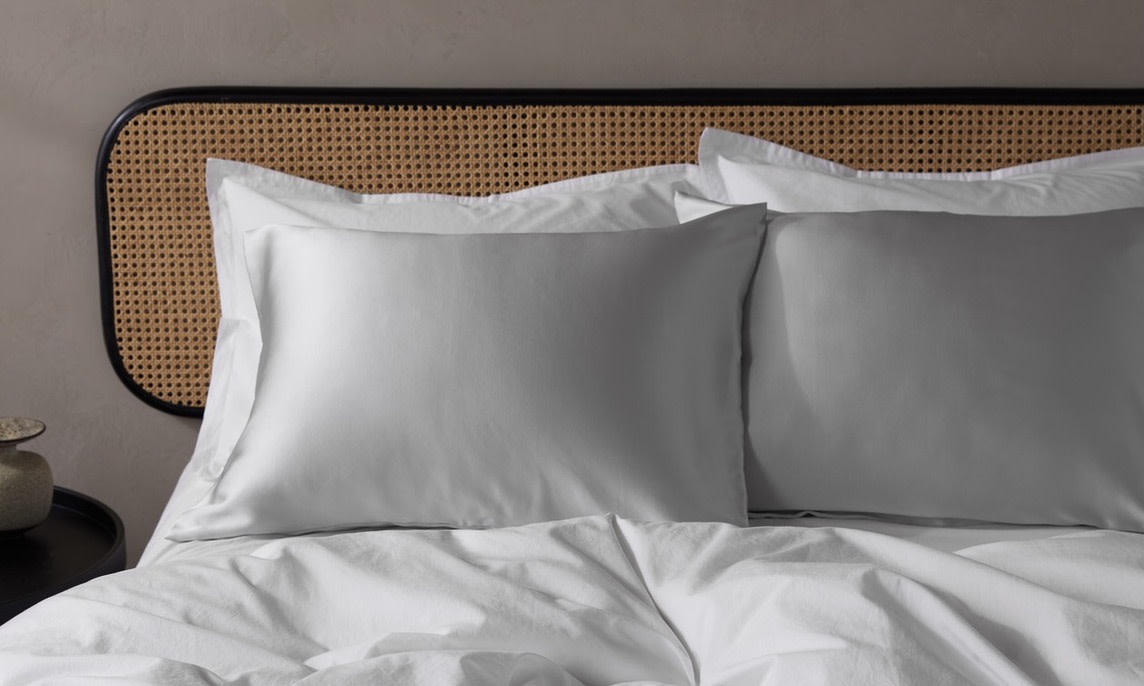 Silk is synonymous with luxury — the smooth, lush fabric invites the most sumptuous slumber. But there’s a practical side to this rich fabric: Silk pillowcases can be an integral part of your face and hair beauty routine.

Why Sleep on a Silk Pillowcase?

Silk’s luxurious feel is thanks to its long, natural fiber that produces a lightweight fabric that is incredibly soft. The fabric’s breathable qualities can help regulate body temperature. This makes it an ideal year-round material, keeping you cool in the summer and warm in the winter.

Let’s start with the basics about what to look for in silk, then we’ll explain why upgrading to a silk pillowcase could lead to some beautiful outcomes.

A Brief History of Silk

Silk has been around for a long time. The oldest known silk fabric is thought to be about 5,000 years old.

According to Chinese legend, the fabric was discovered by accident when Empress Si Ling-Chi was drinking a cup of tea while sitting beneath a mulberry tree, and a Bombyx mori’s cocoon dropped from the tree and into her cup. The hot water from the tea unravelled the shimmering threads. This inspired the empress to weave them into a luxurious gown.

The empress eventually went on to develop sericulture, the science of silk production, by learning to cultivate silkworms, extract the fibers and weave them into a fabric.

The Silk Road opened trade routes with China around 130 BC, allowing emperors and ruling classes outside of China to experience the rich fabric. But although its luxury was sought after, silk production remained a tightly kept secret in China for nearly 3,000 years. China is still the dominant source of silk, although India and Japan also are now among the top silk producers.

Although silk can come from other sources, the fibers are less uniform in color and texture compared to mulberry silk, thanks to the Bombyx mori.

The silkworm’s exclusive diet of mulberry leaves produces a fiber that is more refined, durable and uniform. In fact, mulberry silk is considered the highest quality silk available.

Additionally, mulberry silk fibers also contain a natural protein that reduces the potential for the accumulation of dust mites, mold and other allergens.

Silk’s long history lives on today, as the highest quality silk material is still produced by the cocoons of the mulberry silkworm. Even the name “silk” is a derivative of the name of the Empress who discovered it.

How to Identify High-Quality Silk

Even among mulberry silk fabrics, there are differences that set the highest quality materials apart — namely, their weight. Silk is measured by weight in a Japanese unit called momme (equal to about 3.78 grams).

The higher the momme, the more luxurious the fabric. Silk that’s under 20 momme is considered lightweight and is typically the least expensive. Anything in the range of 20 to 22 momme is considered a good-quality, medium density silk. For the best of the best when it comes to luxury, look for silk that’s 25 momme, considered the benchmark for the highest density, best silk. The Silk Pillowcase you’ll find at Parachute is made of 25 momme mulberry silk.

Benefits of a Silk Pillowcase

The benefits of sleeping on a mulberry silk pillow case start with a good night’s sleep. Silk’s soft, sumptuous material provides the perfect environment for a more restful sleep. Because the fabric naturally helps regulate temperature, you’ll spend less time flipping your pillow for the “cool side.” With silk, it’s all cool.

Learn more in our guide to Picking Bed Sheets Based on How You Sleep.

Getting a more restful sleep is a key ingredient for healthier looking skin. Think: appearing less tired with fewer dark under-eye circles. But the beauty benefits of a silk pillowcase go even further.

Benefits of a Silk Pillowcase for Skin

A good night’s rest can do wonders for your skin’s appearance, but sleeping on a luxurious silk pillowcase can elevate your sleep time into a beauty routine.

Sleeping on a mulberry silk pillowcase can also help you save on your beauty products. Why? Silk is made with a protein fiber — as opposed to linen and cotton, which come from plant fibers. That protein fiber gives silk a lower absorption rate than linen or cotton, so mulberry silk pillowcases will naturally absorb less of your beauty products while you sleep. You’ll be able to use less product and enjoy the same benefits.

There are several benefits of a silk pillowcase for acne. Silk’s super-soft characteristics are particularly helpful for those prone to breakouts. That’s because breakouts can be exacerbated by the friction from your skin coming into contact with coarse-textured fabrics. Plus, the more restful sleep you can enjoy by sleeping on a mulberry silk pillowcase is a natural deterrent for stress-related breakouts.

Benefits of a Silk Pillowcase for Hair

You’re likely familiar with bedhead. It’s that tangled mess of knots and frizzy hair that greets you when you wake up in the morning. Your pillowcase could be partly to blame.

It’s natural to move and turn in your sleep, causing your hair to rub against your pillowcase. That creates friction that can leave your hair a tangled mess — and even lead to breakage and split ends.

In contrast, a silk pillowcase’s filaments are long and strong, creating a surface that is less likely to damage your hair. The mulberry silk’s smooth texture reduces friction. That in turn can help you preserve your style and keep your hair looking soft and healthy.

Also, because silk has a lower absorption rate than other common pillowcase fabrics, the best silk pillowcases are less likely to dry out your hair. This benefit is particularly important for people with fine, blond, frizz-prone or curly hair. Those hair types are all more susceptible to dryness, so choosing a silk pillowcase for curly hair or other dry hair types can help your hair retain its moisture.

And let’s face it, waking up to a “good hair day” is a nice way to start any day.

Although you might confuse silk with the similarly shiny satin, the two are distinctly different products. They aren’t even technically in the same category. Silk is a raw textile material, while satin is a weaving pattern.

A fabric can be considered satin if it contains silk, polyester or nylon. If the fibers are short-staple, like cotton, the resulting fabric is called sateen.

Learn more in our guide on Sateen vs. Satin vs. Silk: What’s the Difference.

One way to tell the difference between silk and satin immediately is by looking at the back of the fabric. Although satin may look lustrous like silk on the front, the back of the material is duller. Silk will look smooth and shiny on both the front and the back.

Because silk is woven using the long and strong silk filament, it can create a more breathable fabric than satin. Satin is generally less expensive, but doesn’t offer the same beauty benefits as silk.

Sleeping on silk offers a variety of benefits, but it may not necessarily be the first choice for every style or every preference.

If you prefer the casual elegance of lightweight linen bedding or the crisp, coolness of percale bedding, the lush feel and look of silk may feel a bit overwhelming. Switching to a silk pillowcase lets you enjoy the beauty benefits of this sumptuous material without having to commit to silk sheets for your whole bed.

To maintain the style of your bedroom, consider swapping out one of your regular pillowcases with a silk pillowcase just before heading to bed. Store your silk pillowcase during the day in your closet, hanging it on a wide-bar hanger.

For more details on choosing the right fabric for your pillowcase and bedding, read these other Parachute fabric guides:

How to Wash and Care for Silk Pillowcases

If you’re investing in the benefits of a silk pillowcase, proper care is essential to ensure durability.

Silk pillowcases can be placed in a mesh bag and machine washed in cold water on the gentle cycle. Alternatively, you can also hand wash your pillowcase.

If you want to store your silk pillowcase, hang it on a wide-bar hanger. Don’t use clips, as they’ll leave an imprint on the fabric. For long-term storage, remember to clean the pillowcase before you store it, and use a breathable garment bag to avoid attracting moths.

For further information about caring for your pillowcase, read our guide on How to Care for Silk.

Where Can You Buy High-Quality Silk Pillowcases?

When you’re ready to elevate your beauty and sleep routine, it’s important to select the best silk pillowcase, so you know you’ll be satisfied with the quality and make a sound investment.

The Silk Pillowcase you’ll find at Parachute is both lusciously soft and naturally hypoallergenic. It’s made of 25 momme mulberry silk — the highest quality silk on the market. The natural fibers in the fabric allow for more air flow, helping keep you warm in winter and cool in summer.

You can choose from a standard size or king size silk pillowcase for the perfect fit.

This 100% silk pillowcase is Oeko-Tex Standard 100 certified, ensuring your pillowcase won’t be full of harmful toxic substances and allergens.

Let a mulberry silk pillowcase help you enjoy a more restful sleep and wake up to a beautiful day.

For more bedding ideas and bedroom decor inspiration, read on:

Guide to Duvets and Duvet Covers

How to Choose the Right Pillow

How to Decorate a White Bedroom

How to Decorate a Grey Bedroom

How to Decorate a Black Bedroom Beyond Monochrome

How to Design a Minimalist Bedroom