Organic Clothing Guide: What Natural Clothes to Buy for You & Your Kids 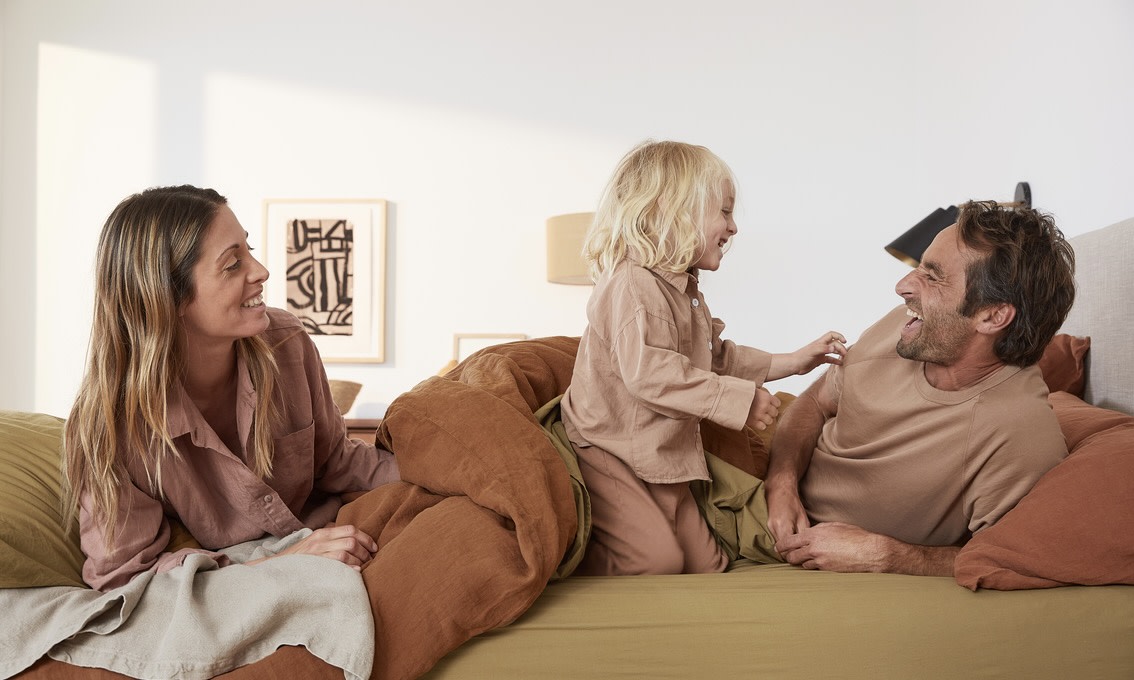 When you see an organic label, what do you associate it with? Health, sustainability, luxury? Do you see a better future where the earth is blissfully free of pollution and your children enjoy the cleanest air and water?

We’ve all impulsively purchased an inexpensive, ill-fitting polyester shirt on the internet. The allure of fast fashion is real, but natural clothing benefits much more than our peace of mind. As the fast fashion industry struggles to sustain itself, organic clothing is essential for healthy living and the sustainability of our planet.

What is Organic Clothing?

Organic clothing is clothing made from fibers grown without the use of genetic modification, artificial fertilizers, synthetic defoliants and toxic herbicides and insecticides. Sustainable clothing is also manufactured without the harmful chemicals typically used in textile processing. Commonly, you’ll see natural fibers like hemp, bamboo and flax, but the most popular organic fabric is cotton. Cotton is renowned for its comfort and durability.

To gain organic certification, organic cotton clothing brands must meet specific criteria from the FTC and USDA. You’ll see a tiny “USDA” organic stamp on these products — but this stamp only applies to organic crop cultivation. If you want to reap all the benefits of organic clothing, look for a certification that covers the manufacturing process, too. The Textile Exchange’s Organic Content Standard (OCS) and the Global Organic Textile Standard (GOTS) are the gold standards when it comes to sustainable clothing.

Organic clothing can also have an Oeko-Tex Standard 100 certification. This certification screens products against the most stringent criteria, ensuring that every thread and button is free from chemicals proven to be dangerous to humans and the environment. You can learn more about Oeko-Tex certification in our guide: What Is Oeko-Tex? Learn About This Certification

The Benefits of Organic Clothing for Your Family

You love cuddling up to your kids at bedtime, but you’ll sleep much easier knowing their pajamas are made from organic cotton and without harsh chemicals. Oeko-Tex-certified clothing choices ensure your loved ones don’t come into contact with substances that could cause harm. Organic clothing is the safer option. Here’s why:

Organic Clothing is Safer for Your Skin

Organic clothing is free from harmful chemicals. That goes beyond toxic weed killers often used in cotton production like Roundup, which have been linked to cancer in humans. It also includes heavy-duty compounds used in manufacturing, like flame retardants, PFCs and formaldehyde.

When synthetic clothing breaks down, the result is microplastics. This pollutant doesn’t just harm marine life. It hurts humans, too. Scientists have linked microplastics to cancer and a number of other health issues — and children suffer the most.

Research has shown that infants consume 10 times more microplastics than adults, and a lot of that comes from synthetic fabrics. You might not be able to stop your kid from chewing on the TV remote, but you can put them in organic clothing that won’t put their health at risk.

Got an itch you don’t want to keep scratching? Organic cotton clothing is naturally hypoallergenic and doesn’t contain harsh chemicals or pigments that might aggravate skin problems or asthma. Your sensitive skin will thank you.

In recent years, fast fashion has been in the hot seat as the world begins to understand the true environmental impact of the fashion industry. Turns out, it’s not so good. We’re buying more clothes than ever, but we’re also throwing away more clothes than ever. Most of that ends up in landfills or is burned (yes, even the clothes we don’t buy). This is why natural clothing brands have been touting sustainability — but is organic clothing actually sustainable? No matter how you swing it, organic clothing is usually much better for the environment.

Industrial farming practices can use 2,700 liters of water just to produce enough organic cotton to make a single t-shirt. That’s roughly the same amount of water humans should drink in three and a half years. Organic cotton crops, which mostly rely on rainwater, use 91% less water by some estimates.

The fashion industry has a massive carbon footprint. It’s responsible for 10% of the world’s carbon emissions, which is more than both maritime shipping and international flights combined. A surprising 70% of those emissions come from clothing production, and synthetic fibers have the biggest impact. So, how can organic clothes help?

Organic clothing production slashes greenhouse gases every step of the way. First, natural fibers are inherently eco-friendly. Cotton is one of the sustainable fibers with the lowest emission levels. Second, organic cotton farming emits 46% less greenhouse gases just by avoiding artificial fertilizer, which is responsible for the vast majority of nitrous oxide emissions in the U.S.. Should we care about N2O? According to one study, it’s “the single most important ozone-depleting emission.”

Conventional farming and textile making rely on a long list of chemicals. By some estimates, 70% of China’s rivers and lakes are contaminated by wastewater produced by the textile industry. In the United States, polluted runoff remains the single biggest threat to clean water. Organic clothing cuts this chemical use and drastically reduces pollution.

Americans throw away a lot of clothes. Every year, 12.8 million tons of textiles are discarded, but more than half of those are synthetic and can’t decompose in landfills. That’s a big problem that organic clothing brands aim to solve. Natural-fabric clothing is biodegradable as long as it’s untreated.

One of the most important differences between regular clothes and organic clothes is in the farming process. Organic farming never uses genetically modified seeds, and farmers use nutrient-rich soil rather than adding artificial fertilizer to over-irrigated land. Instead of toxic weed killers and insecticides, organic farmers use methods like trap crops and beneficial insects. Plants are naturally defoliated rather than using toxic chemical defoliants.

Organic Clothing May Be More Durable

Organic apparel that meets OCT, GOTS or Oeko-Tex standards isn’t made the same way as the average pair of jeans. In the normal production process, manufacturers use heavy duty chemicals to help clothing with things like waterproofing, stain resistance and cling resistance. Does that mean organic clothing doesn’t have these qualities? Nope.

Instead of toxic chemicals, natural clothing brands use healthier alternatives that aren’t linked to cancer and don’t create toxic byproducts. For example, a natural clothing brand might use beeswax to waterproof an organic jacket. As a result, organic cotton clothes aren’t just healthier, they may also be more durable, because the fibers aren’t weakened with harsh chemicals like chlorine bleach.

Organic clothes are typically more expensive than their non-organic counterparts. Since organic cotton doesn’t use GMO seeds, it produces a smaller yield. That means there’s less organic cotton available on the market. (Sustainable cotton makes up less than 1% of global cotton.) This drives up costs, but that’s just the price you pay for health and sustainability.

Since organic cotton is so versatile, you’ll find it in just about everything, from work shirts to cozy robes. How do you choose? Always reach for quality.

Tee shirts and button up shirts are wardrobe staples for a reason. Look for shirts made from organic flax (the fiber used in linen shirts) or high-quality cotton. With sweaters, organic cashmere will give you a luxurious warmth and softness.

As more of us work from home, more of us are embracing the loungewear lifestyle. Look for a high quality soft lounge set or cozy pair of linen shorts, even if it’ll hide off-screen on your next Zoom meeting. The higher the quality, the longer it lasts.

The fabric you choose should depend on your home’s thermostat. If you’re not pushing the air conditioning during the summer, a linen tank will help you cool down. If you want warmth, go for cashmere or wool. Cotton is the best of both worlds and also the most utilitarian. It absorbs sweat, which can help during a tough workout.

Organic robes can be found in a variety of materials like linen, hemp or bamboo, but cotton is generally considered the premiere fabric, especially if it’s woven into terry cloth. Whether you want a thick plush robe for a cozy winter morning or a lightweight robe for summer, 100% natural fabric will always offer the highest quality and absorption.

It doesn’t stop at organic apparel. Your home is your sanctuary, and organic household products can make it just a little bit safer — both for your family and the world outside. Here’s how to pick the best of the best.

You might not be getting the ideal eight hours of sleep, but most of us still spend a lot of time in bed (even if we’re just watching TV). For the best bed sets, look for high-quality, sustainable materials and the Oeko-Tex certification. No one wants to wrap themselves in formaldehyde and chlorine bleach, right?

The fabric you should choose depends on how you like to sleep and your preferred temperature. Linen sheets are breezier, but many people find high thread count cotton sheets the softest. If you’re not sure, see our Guide to Bed Sheets.

Comforters and duvets are all about filling and fabric. If you sweat in your sleep, you’ll probably want to reach for a linen duvet cover or comforter with a lightweight filling. If your house gets cold, opt for a thicker down filling. The bedroom tends to be one of the worst places for allergies, so down alternative duvet inserts and comforters can help keep symptoms at bay.

You spend a lot of time sleeping with your face against a pillow. That means you’re breathing in whatever's in that pillow. Organic pillows can help give you peace of mind, but you’ll only sleep well if you choose the right kind of pillow for you. Some people like firm pillows, while others choose soft ones. If you’ve got allergies, reach for a hypoallergenic option with a down alternative.

Want to learn more? Check out our Pillow Guide: How to Choose the Right Pillow.

Buying Organic Clothing is Worth It

There’s always the impulse to pull the trigger on a fast-fashion outfit that’s been carefully marketed to us on Instagram. Is it worth it? Probably not. The truth is that you just can’t put a price on the health of your family or the planet. Organic clothing helps give us the future we all want: one where our children can thrive.

At the end of the day, we can’t pack up and leave Earth just yet, so we have to protect what we have — and that starts with our health. Oeko-Tex certification can ensure all of your family’s clothing is completely free of harmful chemicals. It won’t hurt even the most sensitive skin. Ready to shop? Browse Parachute’s Oeko-Tex line.

For more home and lifestyle information, read on:

Are Organic Sheets Worth It? What to Look for in Organic Bedding

Home Fragrance Guide: How to Make Your Home Smell Good

Simple Ways to Freshen Your Home This Spring

How to Wash and Properly Care for Bedding

How Often Should I Wash Cotton Sheets?

New Home Checklist: Essential Things to Buy or Upgrade When Moving In

Sateen vs. Satin vs. Silk: What's the Difference?

How Often to Replace Sheets, Pillows and Other Bed Linens