How to Make a Dreamcatcher 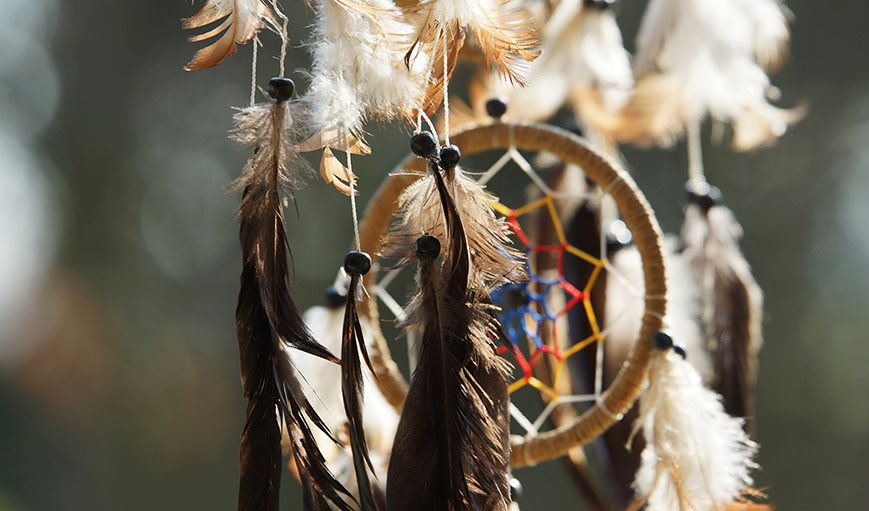 Written By
ERIN SCOTTBERG
Photographs By
Shutterstock
Follow Us
@parachutehome

There’s something magical and comforting about the idea of a dreamcatcher. A Native American tradition, they’re thought to have originated with the Chippewa (also known as the Ojibwe) tribe of North America, who constructed hoops out of the flexible red willow bark and then laced “webs” within to sort the dreams that float through the air while we sleep.

As legend goes, the good dreams pass through the hole in the center of the dreamcatcher and are directed down the hanging feathers to the person sleeping below. The bad dreams, meanwhile, get tangled up in the web, where they remain trapped until the morning sun rises, and they evaporate like the dew. (Of course, this isn’t the only backstory. There are many tales about the origin of the dreamcatcher, and even how they work varies according to each legend, but most stories are variations of this).

Aesthetically, dreamcatchers have come a long way from the string and hoop numbers you might have made in elementary school. They’ve evolved into works of art that can hold their own over any headboard — or even hanging parallel to the ground as a mobile. Style tip: Hang a colorful dreamcatcher next to a crisp, white duvet to create a carefree, bohemian look. We love the idea of creating your own, personalized dreamcatcher that helps ensure your sleep is full of only the best vibes. Here’s how:

Find something round or tear-drop-shaped to use as your rim. You can buy an embroidery hoop or metal ring, or you can go more traditional and make your own out of foraged willow branches or another bendable fiber. If you’re using something store-bought, you might want to wrap it in fabric, yarn or suede trim.

You’ll need some sort of thin but strong yarn to make the web. You could try embroidery floss, a worsted or bulky-weight yarn, suede string — you can even buy artificial sinew thread from most craft stores. It’s totally up to you. We’ve seen some beautiful dreamcatchers threaded with soft cotton sheared into thin strips, hemp cord or even simple butcher’s twine.

This is where you can get really creative. Traditionally, dreamcatchers have a set of feathers hanging from the bottom of the ring — these are how the good dreams find you as you sleep. But you can customize your dreamcatcher however you’d like. Beads, leather, extra hoops, lace or finely crocheted fabric…the options are endless.

Threading the web is pretty simple, but much easier to watch than read. We found the tutorial below easy to follow.

From here on, it’s all up to you. You can knot some hanging strings and feathers, tie on long strips of fabric, wrap a second color through the web. Once you’re comfortable with that stitch, try experimenting with other string patterns. You can work in some crocheting, creative knotting or even additional hoops and fabrics if the mood strikes. Check out Pinterest and Etsy for inspirations.